Sound damping materials can be surprisingly pricey and are poorly understood in how they work. After reading about various products, we chose to go with Peel and Seal because it is relatively cheap and many people like using it in their vehicles. Below we will discuss how sound damping works and some of the material options available that you may want to consider adding to your car. We’ll give you some product suggestions, delve into the physics of what is happening when you are dissipating sound and the best technique for achieving this in a vehicle, and explain how you could improve upon what we did. If you just want to know how to install sound damping, checkout our “Sound Damping” page.

Just want our top suggestions and material specs for products being sold as sound dampeners? Well look no further. Below, we have products ranked, with #1 being the best. We simplified the products to our top five choices, so if you want to see what else is out there, scroll down to the materials section. If you want to learn more about what a CLD is or why the thicknesses of different layers within a CLD matter, be sure to read the rest of the page!

As you can see, the top three choices are butyl-based viscoelatic materials, while the last two are rubberized asphalt-based.

We chose Peel and Seal, which is, technically, a roofing material that consists of rubberized asphalt, but is commonly used for sound deadening in personal vehicles and trucks, and is very affordable. Having a set budget for our conversion and reading many articles on sound damping materials, we chose to skimp, price-wise, and go with the more affordable option. As you can see in the graph and excel file above, there are less rubberized asphalt-based products being used in vehicles than butyl-based products and, the ones being sold, only have a 45 mil thickness. These products perform worse, but still help reduce noise, and are cheaper.

Although Peel and Seal is commonly used in vehicles, you will see very mixed opinions on the product online. Some say it starts to come off on hot days, melts, smells bad, etc… So far, we have not observed any of these issues. However, we also did not apply it to the ceiling of our van. Reading forums and watching Youtube videos, we got the since that those complaining about the product falling off did not apply it properly: it was not installed in the suggested temperature range, the surface wasn’t properly cleaned, there wasn’t good contact between the surface and the product, etc…

Overall, Peel and Seal isn’t the best choice for everyone, but will work for those that are on a tight budget.

So, you want to decrease the noise in your vehicle while driving down the road? Or, get improved sound quality from your car’s sound system? Well first let’s discuss sound, including what it is and how it can be dampened.

Sound is a form of vibrational energy that propagates through a fluid (ex. solid, liquid, or gas) as a wave, with vibrations being the key component. Noise is, simply, undesirable sound, either because it is loud, unpleasant, or impedes one’s ability to hear properly. Within the auto world, reducing noise is beneficial to those that want a quieter drive or improved sound quality from their stereo system. In the case of RVs, campervans, cargo vans, old muscle cars, or trucks reducing noise while driving is commonly sought after. Lucky for you, many industries have investigated the topic of how to reduce vibrations, with the aerospace industry having done the most thoroughly documented research!

Here are some passive ways sound can be dissipated:

All of these methods have some level of overlap. Of course, increasing the distance isn’t really an option for a vehicle. Reflection may have minor improvements in reducing noise. But, because energy can only be transformed from one type of energy to another, you will see the largest improvement in noise reduction when you convert sound energy into an un-audible form. Both the diffusion and absorption of sound commonly convert sound energy to thermal energy. Because the loudest sounds in a van are coming from the body of the vehicle, it makes sense to target the reduction of sound through diffusion.

To understand the transformation of sound energy to thermal energy and, thus, how the diffusion of sound works, it is important to understand the physical mechanism of damping. When a sound wave’s amplitude of oscillation decreases with time, either due to friction or other form of resistance, the wave is said to be damped. In the case of sound diffusion in a vehicle, this vibrational energy is being dissipated as heat.

So, let’s go back to discussing why a van is noisy and discuss what can be done to reduce this noise. Metals are poor damping materials, resulting in their vibrations having high amplitudes. With a cargo van’s cargo area consisting of all metal, this makes for a loud ride. Structural damping is the preferred method for reducing this noise. Structural damping uses viscoelastic materials to store strain energy when deformed and dissipate some of this energy through hysteresis. Thus, structural damping dissipates vibrational energy before it is radiated as noise.

Now that you understand a bit about sound, ways sound can be dissipated and damping, let’s delve a bit deeper and talk about constrained layer damping. Below is a graphic summing up the previous section and where we are about to delve into:

Constrained layer damping (CLD) is the most commonly used method for damping sound in vehicles. This is because CLD materials are readily available, affordable, can be to be relatively thin and lightweight, and have a high loss factor. The size and weight are important because you have a limited amount of space and payload in a vehicle. Additionally, they can be used in harsh environments because the damping layer is protected by the constraining layer.

What is a viscoelastic material? A material that exhibits both viscous and elastic material properties, with time dependent strain. The visco- prefix means parts of the material’s polymer chain move/rearrange when a stress is applied, known as creep. The elastic- suffix means the material fully recovers. As the polymer chains rearrange, they remain a solid, forming a back stress that builds until the magnitude becomes equal to the applied stress. At this point, the material stops creeping and, when the applied stress is removed, the accumulated back stresses allow the material to return to its original shape. During this process, sound is dissipated as heat.

One thing to note, before discussing the CLD products available, is that you don’t have to fully cover the body of your vehicle with these damping materials. In fact:

There are a lot of CLD products out there that can be used for sound damping in a car. In fact, there are an overwhelming number. Some factors that you’ll want to consider before selecting one are the base structures dynamic properties, the viscoelastic material being used in the CLD product, the thicknesses of the constraining layer and viscoelastic layer in the CLD product, the temperature the product is going to be used in, and, most importantly, the cost (the weight shouldn’t very too much from one product to the next). 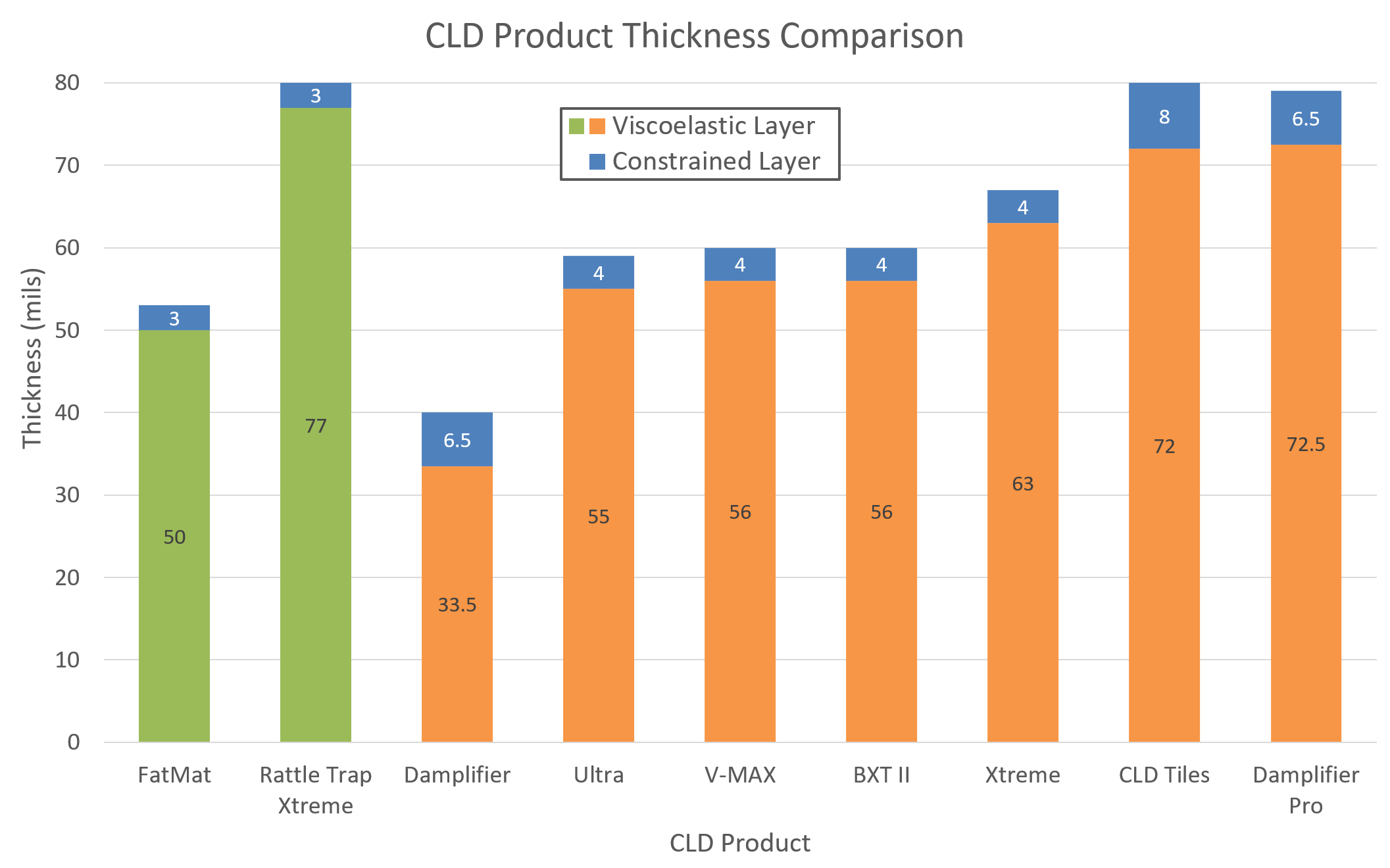 All of the CLD products being sold for cars are either butyl-based or rubberized asphalt-based viscoelastic materials. Rubberized asphalt, generally, does not dampen as well as butyl, but is significantly cheaper. Of the products being sold on the market, only a few provide acoustic loss factor data. So, using the specs provided, the best way of evaluating CLD products is  thickness (overall, viscoelastic layer, and constrained layer). 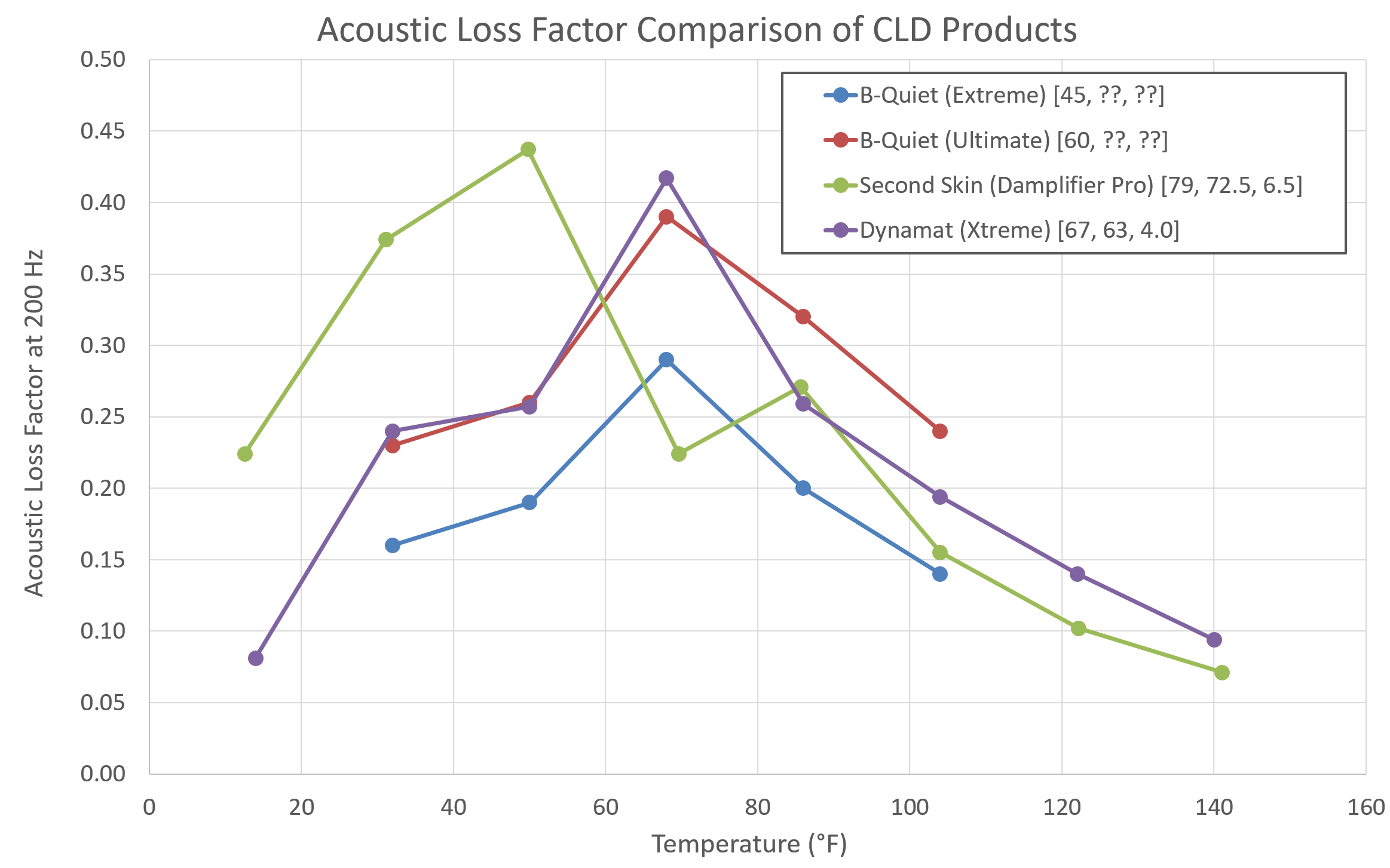 If cost isn’t a concern, you should use SDS CLD tiles or Second Skin Damplifier Pro. Because the Second Skin Damplifier Pro provides acoustic loss factor data, we would go with this one. A cheaper option that should still perform relatively well is Dynamat Xtreme and the cheapest options are the rubberized asphalt-based CLDs. (see the attached excel file: Constrained Layer Damper (CLD) Comparison) 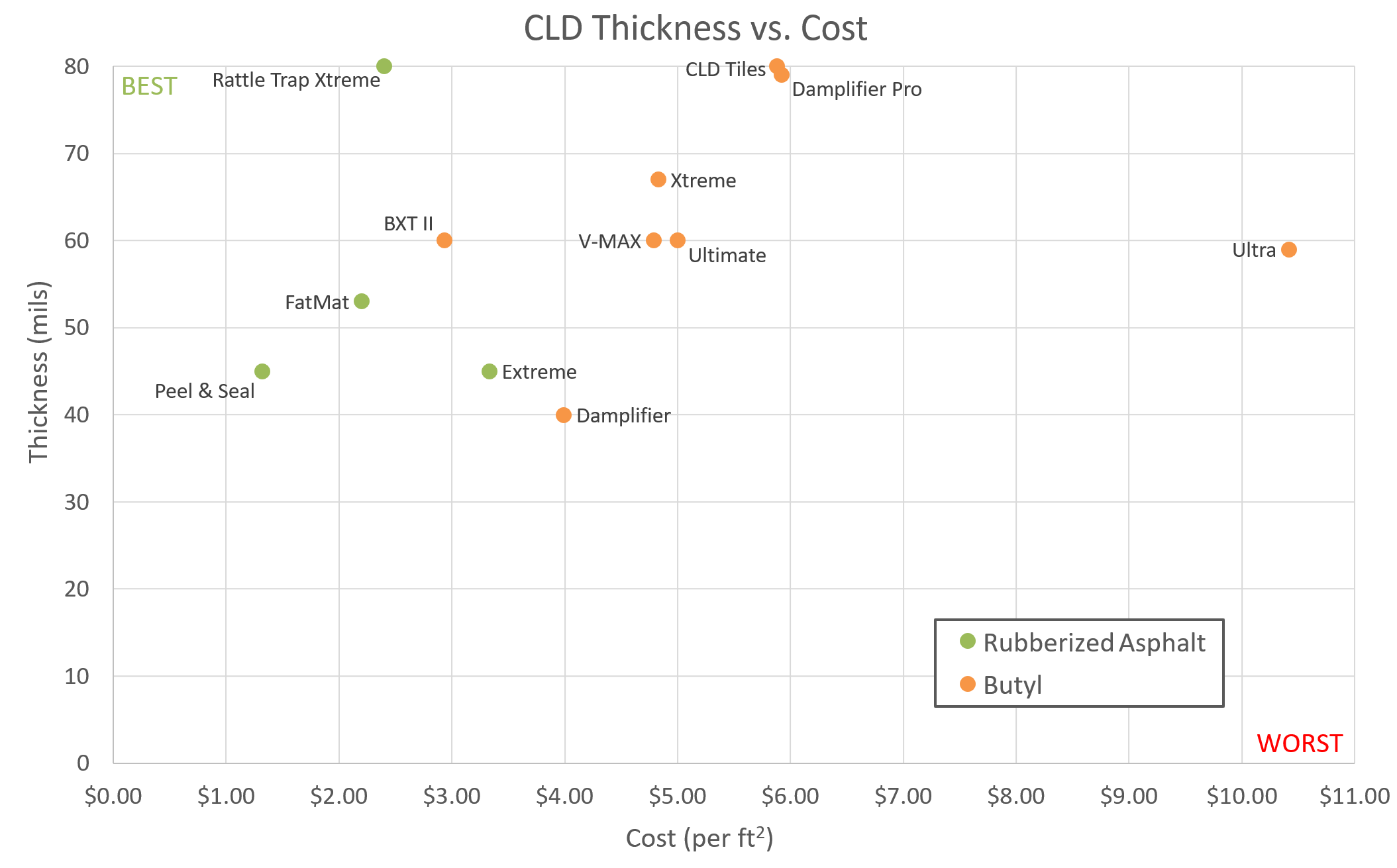 As an alternative to what we did, we would consider covering ~35% of the body of our van, using FatMat Rattle Trap Xtreme, evenly distributing the material across all walls, ceiling, and floor. After having sound dampened the wheel wells, our van is still louder than a regular car (being the most noticeable when trying to listen to music on the highway). While this isn’t a problem for us, it may be for some.

If you are only planning to cover the wheel wells, we would choose B-Quiet’s Extreme, as a rubberized asphalt-based product, over Peel and Seal next time. B-Quiet Extreme is actually marketed as a product to use in cars and provide the most data on product performance. Additionally, it is still a relatively cheap sound dampener. In terms of thickness, FatMat’s products appear better than B-Quiet, but it is hard to say which would perform better because of the limited information FatMat provides for their products. In terms of butyl-based products, we would choose Second Skin Damplifier Pro. This is one of the more expensive sound deadeners, but given the small surface area you are covering, it is still fairly cheap.